Geography Of A Horse Dreamer

A Mystery In Two Acts 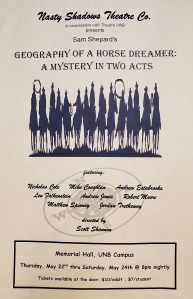 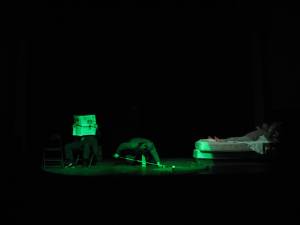 Dream state with each in his own world.

Santee, Beaujo, and Cody are in each in their own worlds just before the action begins to start Act I. 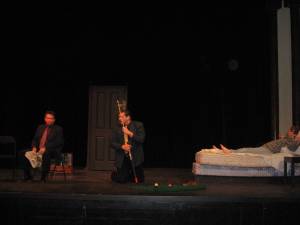 The gangsters begin their ongoing discussion about Cody’s well being and/or worthlessness as it pertains to his dreaming winning horses. It becomes clear at this point Santee is not a big fan of Cody, while Beaujo seems to be sympathetic to the dreamer. 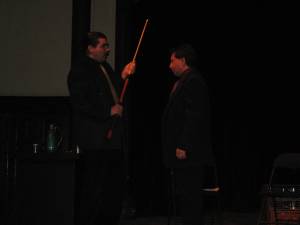 Santee does not like the sounds of how “soft” Beaujo seems to be getting with regards to treatment of Cody. 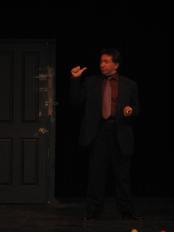 “Go ahead! Cut him loose”, exclaims Santee — the man is on the verge of a breakdown. 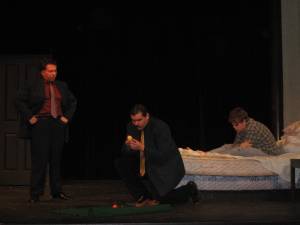 Beaujo expounds philosophical with a pool metaphor about the nature of an artist’s creativity. 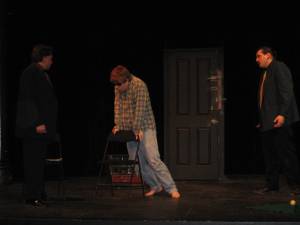 Cody finally has the strength to rise from the bed. As he wanders the room he tries to explain to both Santee and Beaujo what he as the dreamer/artist needs in order to be creative. 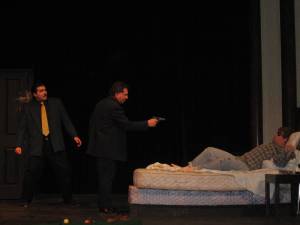 Back in the sack!

Santee has just told Beaujo to put Cody “Back in the sack!”. Santee has had enough of Cody and is about to go phone the boss for further instructions. 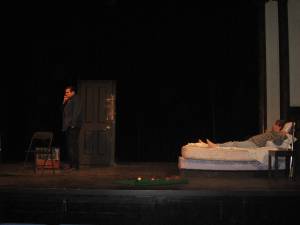 Beaujo contemplates while Cody remembers. Santee has just left the room after Cody’s behaviour has irritated him, and Beaujo is trying to explain to Cody how to behave. 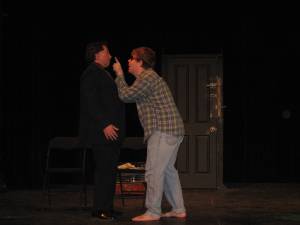 After Beaujo left the room to phone Fingers and get Santee some Scotch, Cody awoke in a slightly altered state — he has more energy then before and is speaking with a bit of an Irish accent about dog racing. While this is good news since Fingers has assigned the group to picking dog race winners now, the unexpected shift in Cody and knowledge of the dogs comes before he’s been made aware, consciously, of the dictated turn to dog racing. He just really does not seem himself at this point. 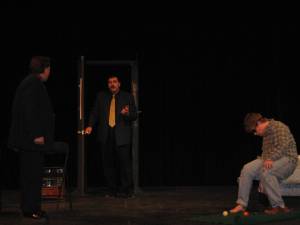 Santee has pushed Cody out of his face just before Beujo returns with news that Fingers is coming to see them…he’s also got Santee’s Scotch in hand. 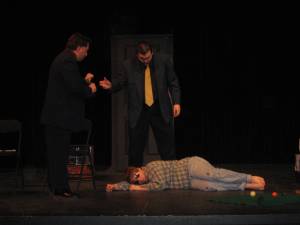 End of an act.

Having been shaken from his Irish-state by Santee’s push and Beaujo’s sudden return, Cody collapses to the ground after pleading to talk with Fingers. 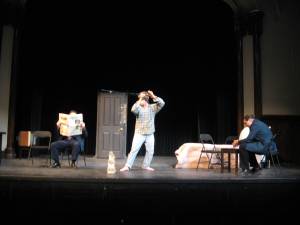 Act II finds the three in a new hotel room with things looking up: they have a TV, sheets on the bed, and room service. However, Fingers and The Doctor are about to arrive which makes matters somewhat tense.

Unfortunately, due to user error or camera error, further photos from Act II are not available.