This page contains rehearsal notes and thoughts from a past production’s rehearsal process:

In rehearsal with the following SHADOWS:

In rehearsal with the following SHADOWS:

And we’ve now reached the end of the process, the actual run of the shows – right now we’re half way through our 4 night run having played 2 nights in Fredericton this past week to a couple of engaged crowds, and playing in Saint John (Nov 13) and Moncton (Nov 14) this week. I tried a few times and it never worked out for one reason or another, but this will be our 2nd time bringing a show to Moncton, and I like that we’ve expanded that way … makes me wonder about visiting other communities as well … ?

As I noted in my only other Rehearsal Note for this process, we decided last minute to tackle some new Beckett and revisit an old MacIvor piece, which were also chosen with the practicality of our time-line in mind: we needed to stage shows we could present in our usual Nasty way, but knew we didn’t have time to dig deep into anything extensive, hence the short Becket piece and a re-stage. The bonus is that this nicely captures Nasty Shadows at 20 years, and our debut staging of A STORY JONES in the spring of 2019 will reflect the newer path we’ve been trying to follow by bringing some original work to the stage … I think this might be the pattern that will work: falls = known/published plays; springs = new work … we’ll see how that goes but locking into a “pattern” has its own woes … but advantages as well.

The table, the hat, and the book …
Beckett’s OHIO IMPROMPTU
(Memorial Hall, Nov 2018)

And so Elizabeth accepted the challenge of directing Beckett’s OHIO IMPROMPTU, and what an insightful approach she had right from the beginning – I was thoroughly impressed by her tactics, from the detailed analysis she gave at our first sitting, describing how many times certain elements of the script occur, for example, to the metronome. I knew then we were going to bring this weirdly haunting tale of two-yet-somehow-one men/an to a portrayal that would make our unofficial patron saint proud (aka Beckett). Liz gave the process, which was confined within Beckett’s already detailed stage directions, she gave it an integrity that latched onto the details of the moments built – who knew knocking could be so hard to embody properly! Distracted mostly by my HOUSE work, I was *so* grateful to Liz’s attention to the benign and describing precisely what she wanted from us. We had one run in the classroom that was simply mesmerizing to me, Michael absolutely *nailed* the voice/tone/sentiment throughout based on Liz’s direction after toying with the delivery for a bit – I was floored at the end of it. Spooked. I felt Freddy’s Thursday night performance came VERY close to that feeling – and I’ve had this happen with Beckett before where the high mark is hit in a rehearsal, and we spend the run chasing that, to good effect, but not hitting it again … we’ve got 2 more shots right now, so let’s see how each city feels as we tell the sad tale … one last time … or two … 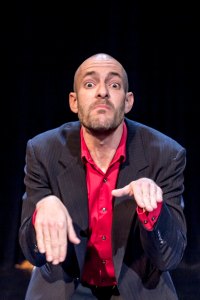 HOUSE, as I mentioned, has been a growing and consuming entity for the past 60 days. It is such a trip to be inside this text, Victor is a heart-breaking character, both aware and unaware of his madness. His level of honesty used to baffle me, but now seems par for the course in the age of social media … and yet, he’s still taken it up a notch: he’s telling you this in person. Live. And that is paramount to Victor’s existence, his HOUSE! Michael has been the perfect guide through this version of Victor, being in the unique position of having been thoroughly drenched in the first version of Victor 10 years ago when he first joined the Shadow world – THANK GOD HE DID! We are so grateful to exploit Michael’s Nasty talents both on/off stage, or both within the same show! 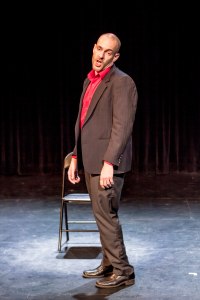 In the case of HOUSE, last time Michael was the Technical Director and ran the show, almost stepping in as an assistant-director in Fredericton’s run, and this time he is filling that role again while also being the actual director – it’s his vision and eye that we’re working to, that I’m responding towards when we’re in the room. Michael has let me bring the old Victor into the room to an extent, but where Bob may have allowed me to flounder on my own with some of the details 10 years ago (due to the nature of our long-distance process), Michael has instead nurtured those details to help create an even more nuanced Victor this time around (I like to think this is a bi-product of our years of Nasty work as focusing on the details has been our major strength in performance, I think, an earmark of a Shadow production). Building on the work Bob and I originally did, which has quite easily bubbled back up to the surface for me, Michael has given me note after note that has continued to make me rethink a moment, or a move, or an inner reasoning, and helped develop new moments. This has been another great one-on-one session with a fellow Shadow that has fulfilled what I would want from a Nasty rehearsal process and then given more – THANK YOU, MICHAEL! Looking forward to the coming week … and beyond!

And let me give out another HUGE THANKS to our Fredericton audiences and our upcoming “crowds”: You are so patient with what we are presenting for you each time, I do feel a connection in the room that is mostly all of us sharing in the work, the story we are playing. I know we ask a lot sometimes, like to watch and listen to one guy rant for an hour, or watch another guy read from a book to yet another guy for 10min – huh? It’s an odd thing, this world of theatre, the seemingly benign brought into sharp focus under the light and focal direction of the audience, locked within the confines of a designated time, to share together, and it can create such a unique feeling … the feeling of theatre … love it …

Thanks for reading and for coming out, your time is appreciated …

Upon realizing we should grant ourselves more time to really make A STORY JONES come to life, I asked the Liz & Michael about changing gears and doing something more manageable for the fall production. This way we have plenty of time to do what we need at this point to stage A STORY JONES in the spring of 2019.

So we floated a few ideas, and in the end came up with something new from an old friend, and something old now but that was new for us 10 years ago. Beckett’s OHIO IMPROMPTU fulfills the “something new” criteria that felt right to meet so we were stretching ourselves in a different direction. Beckett is an old friend of Nasty Shadows, well, his work is, and the spirit of that work is a big part of where we began as a company 20 years ago. The “something old” is MacIvor’s HOUSE, which was new to the Nasty world 10 years ago — how I hadn’t heard of MacIvor until 2007 or so is beyond my comprehension, but I am ever grateful to David Yarwood for introducing me to MacIvor’s work and blowing my theatrical mind.

And so here we are, celebrating 20 years of Nasty theatre in the Shadows … I think we’ve made some appropriate choices of plays to share at this time … can’t wait for you all to see them …