This show was staged as part of an evening of two one-act plays; it was followed by Daniel MacIvor’s House.

Production was restaged in October & November 2010.

Photos by Michael Holmes-Lauder
(CLICK ON PHOTOS TO ENLARGE) 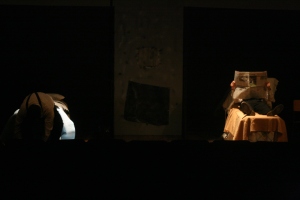 BEN is lying on a bed, left, reading a paper. GUS is sitting on a bed, right, tying his shoelaces, with difficulty. Both are dressed in shirts, trousers and braces. 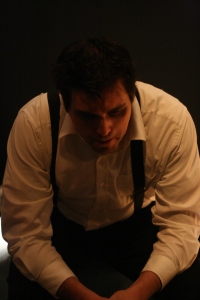 GUS ties his laces, rises, yawns and begins to walk slowly to the door, left. He stops, looks down, and shakes his foot. 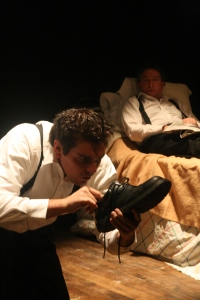 BEN lowers his paper and watches him. GUS kneels and unties his shoe-lace and slowly takes off the shoe. He looks inside it and brings out a flattened matchbox. He shakes it and examines it. Their eyes meet. 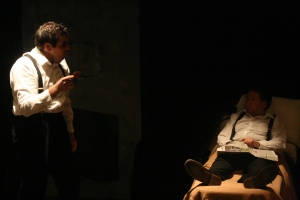 Gus and Ben stare at each other.

BEN lowers his paper and watches him.

Gus about to interrupt

Gus: (He sits in a chair. Ruminatively.) He’s laid on some very nice crocery this time, I’ll say that. It’s sort of striped. There’s a white stripe. 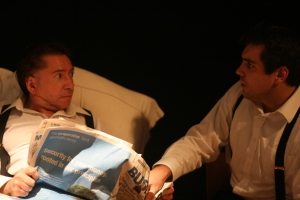 You know. sort of round the cup. Round the rim. All the rest of it’s black, you see. Then
the saucer’s black, except for right in the
middle, where the cup goes, where it’s white.

Then the plates are the same, you see.
Only they’ve got a black stripe – the
plates – right across the middle. Yes,
I’m quite taken with the crockery.

Ben turns his head and sees the envelope. He stands. 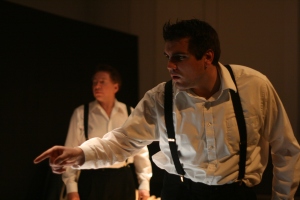 They stare at it.

Ben: Pick it up.
Gus: What do you mean?
Ben: Pick it up!
Gus slowly moves toward it, bends and picks it up.
What is it?
Gus: An envelope.

Who says light the gas?

They stare at each other, breathing hard.

Shall I try it on here?

Ben: Well, what are you waiting for?
Gus: I want to see if they light.
Ben: What?
Gus: The matches.

He takes out the flattened box and tries to strike.

He throws the box under the bed.
BEN stares at him
GUS raises his foot.

Shall I try it on here?

BEN stares. GUS strikes a match on his shoe. It lights.

Ben: (wearily). Put on the bloody kettle, for Christ’s sake.

BEN goes to his bed, but, realising what he has said, stops and half turns. They look at each other.

Gus: (tentatively). I thought perhaps you might know something.

BEN looks at him.

Are you feeling alright?

They look at each other.

Ben: Are you feeling alright?
Gus: Sure.
Ben: Go and make the tea.
Gus: Yes, sure.

There is a loud clatter and racket in the bulge of wall between the beds, of something descending. They grab their revolvers, jump up and face the wall. The noise comes to a stop. Silence. They look at each other.

Everything on the plate.

Ben: I only eat those with beer!
Gus: Well, where were you going to get the beer?
Ben: I was saving them till I did.
Gus: I’ll remember this. Put everything on the plate.

They pile everything on to the plate. The box goes up without the plate.

Gus: (up the hatch). Carton of milk! Half a pint! (He looks at the label.) Express Dairy! He puts the carton in the box.)

The box goes up

Just did it.
Ben: You shouldn’t shout like that
Gus: Why not?
Ben: It isn’t done.

They've sent back the tea.

GUS looks back at the box. The packet of tea is inside it. He picks it up.

Gus: They’ve sent back the tea.
Ben: (anxious). What’d they do that for?
Gus: Maybe it isn’t tea-time

The box goes up. Silence.

Gus: They do all rights, don’t worry about that. You don’t think they’re just going to sit there and wait for stuff to come up from down here, do you? That’ll get them nowhere.

He wants a cup of tea!

They do all right.

And he wants a cup of tea.

That’s past a joke in my opinion. 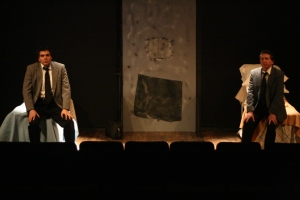 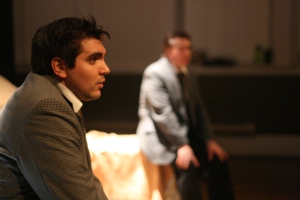 Gus listens to the instructions.

What's he playing all these games for?!

Ben: Stop it! You maniac!
Gus: But you heard!
Ben: (savagely). That’s enough! I’m warning you! 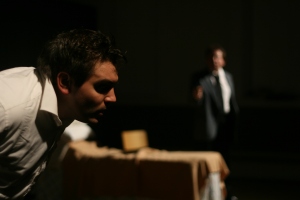 Gus enters from the passage door.

The door right opens sharply. BEN turns, his revolver levelled at the door.

He is stripped of his jacket, waistcoat, tie, holster and revolver.

Ben is standing by the kitchen door.

He stops, body stooping, his arms at his sides.

He raises his head and looks at BEN.

They stare at each other.

These days, New Brunswickers have the opporunity to take in some major productions, such as the musical Chicago, or last year’s presesntation of Dracula. But some theatre lovers are focusing on presentations on a much smaller scale. The Nasty Shadows Theatre Company is bringing out two minimalist plays later this month.

The first play, House, plays in Saint John at UNBSJ’s Hazen Lecture Hall Nov 28 and 29, 8 p.m., and in Fredericton on Dec. 3-5. From Cape Breton-born Daniel MacIvor, it’s a one-act, one-man play about a character whose life is unraveling. The second play, The Dumb Waiter, is only in Fredericton Dec. 3-5. From Nobel Prize winner Harold Pinter, it shows two gangsters and their interaction under pressure. It, too, is a one-act play.

This stripped-down appraoch is nothing new to the company. It was formed around this mentality, says actor and director Scott Shannon.

“We’ve always focused on actor-driven performances, and the rehearsal process that gets us to the performance itself,” Shannon says. “This harkens back to the thoughts of people like Jerzy Grotowski or Peter Brook who believed theatre could be created anywhere, and at base all that’s needed for theatre to take place is an actor on a playing space and somebody watching that actor.

“This philosophy of theatricality has very much shaped my interests in drama. We focus on small casts with minimal technical aspects.” This doesn’t mean his group thinks that theatrical productions must always be on a small scale, though.

“I don’t place such value judgements on theatre and/or art,” he says. “It’s not so much that ‘smaller is better,’ but that the more intimate the performance is with an audience, the more the performance caters to the aspects of drama that interest me. I’m not interested in trying to fool an audience into thinking they’re watching reality or a movie.” Shannon says that approach in theatre allows the actors to create anything they want, so long as they can engage the audience to follow along.

“I find that a more stripped down creation enables that ‘in the moment’ relationship with the audience more so than a largely produced show might — again, the immediacy and relationship between the audience and the performers is what we focus on.” The company’s membership fluctuates year to year — Shannon is the only constant member, with a lot of involvement from the group’s co-founder, Shannon’s former drama professor, Robert Moore. The group doesn’t recruit volunteers too heavily from the community, instead opting to handpick talent to fit with its ranks. They then choose the plays based on the actors available.

“We don’t require a large group of people to make our shows happen, but it does stretch some of us pretty thin at times, especially when we’re close to an actual run as we’re all involved in most aspects from props, to costuming, acting and advertising,” says Shannon.

Because of the group’s small-scale approach, its productions have stayed low-key. Most of the company’s support comes from within, Shannon says, and though Theatre UNB in Fredericton and UNBSJ’s Lorenzo Society have been of assistance, the group’s limited resources do end up restricting them somewhat.

“Our weakest production component would be advertising,” says Shannon.

The company mainly uses word-of-mouth, public service announcements, or e-mail newsletters to inform the public about their work, which keeps them below the radar.

“I suspect we’re not well known, but we have a relatively loyal audience from the university and arts communities in both Fredericton and Saint John,” Shannon says.

After their upcoming productions, Shannon’s hoping his group can work on a production in the spring, although the specifics are up in the air. He’s hoping they can run an original script from within the group, something they haven’t done since 2000.