Another guy said, “Well, that’s a good story, but is it the truth?”
And the third said, “Oh hell, no, Howard, you know the truth’s no story t’all.”
— from Travels Through New England by Spalding Gray

Sitting with my favourite person (my wife) and one of my best friends (Nick), watching my favourite Canadian theatre artist (MacIvor) create a show about a performer/writer (Spalding) who has had a huge influence on who I am since I was 17, was one of my life’s theatrical highlights – hell, I’ll say my life. Period.

And then at one point my favourite song by a certain band (Talking Heads) started playing as MacIvor sang along and shared that it was his favourite song. My head almost exploded.

The three of us had traveled to Halifax for this one night of theatre: MacIvor’s Who Killed Spalding Gray? at Neptune’s studio space, followed by a mad dash to catch Zuppa Theatre’s Pop-Up Love Party at the Lion and Bright Café (the mad dashing ended up being unnecessary, but how could we know many of those at the first show would also be making the 2nd?).

[NOTE: THIS IS NOT A REVIEW. I am not a reviewer by any stretch of the imagination – all this is said in the interest of generating theatrical discussions]

WHO KILLED SPALDING GRAY? by Daniel MacIvor
If you are a fan of both MacIvor and Gray, then you were probably given a certain perspective about the show others were not. If you were new to one or either or both of these artists, then I think you were treated to the beginning of, what will be for you, an engaging journey through the souls of two men that won’t end with your having seen this one show. (As indicated earlier, I’m heavily influenced by and heavily wowed by both these guys’ work: The opening of Spalding’s Sex and Death to the Age 14 was my audition monologue out of high school for acting school; I’ve performed 4 of MacIvor’s one-man shows, and directed a few others. Every nuance of the show seemed to ripple across my mind, and sink into my heart.) 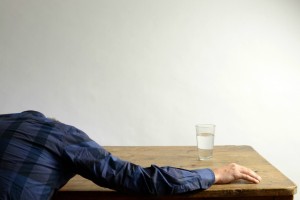 We saw the 2nd performance of this new piece, which is created by the usual duo of Daniel MacIvor and director Daniel Brooks, with Iris Turcott providing dramaturgy. I am sure there will be much development over the coming runs of the show, and I really hope to have a chance to see the show a year or so from now.

[I guess, in some sense, when I’m saying “MacIvor”, at times I’m referring to him, the performer and he who is responsible for the text, but at other times “MacIvor” is referring to the creative force behind the show, which certainly includes more than just the one man.]

I was taken back to that thrilling feeling of discovering Spalding Gray for the first time, along with the amazement of actually watching MacIvor in one of his own shows. What has always struck me about the one-man shows MacIvor creates, as opposed to say, Spalding (and countless other less talented imitators), is that MacIvor’s shows feel like actual plays. This has always been a good thing for me, mainly because it pointed to the possibility of staging the work; Spalding’s work seemed more his own story, and not fruit for performance. This particular show blurred those lines with MacIvor playing himself (as he did in the last one-man show), but as we made our way through the form of the story(ies) it was clear we were very much inside that world MacIvor is so brilliant at creating. A theatrical space we can only refer to as MacIvor-esque, or some such term. Seriously, it blows me away almost every time. Spalding, on the other hand, told stories in a more straightforward manner – at a table, sitting, and just talking to you, but what a story teller and what stories. Both men’s methods are equally captivating when executed by masters, and both are employed in this piece of self-discovery and love for a fellow artist. In fact, it’s the form of the stories by these 2 storytellers that were conjunctionally explored for their validation of the truth. Is it easier to presume the story is true when Spalding just sits and tells us about his “life” vs. presuming the story is false when MacIvor performs it for us as a “character”? I don’t know, and I’m not overly concerned with a “right” answer, but I loved the way the ideas tickled my brain, and I will tell you I was thoroughly satisfied by the way the types of storytelling were explored in this piece. As I said, MacIvor’s touch prevails in the end to most impressive results.

So yes, I am a bit swept away/impressed/in awe of what MacIvor creates – have been since discovering his work in ’06 (yeah, I can’t believe nobody introduced me to this guy before that time!). However, I will say the execution of the show had it’s possible moments of, dare I say, insecurity, for lack of a better word. Hard to pinpoint, which is a testament to the craft we were witnessing, but in the talk-back afterwards Brooks admitted to thinking MacIvor still had some work to do as an actor in terms of “owning” the work, which I thought was apt, but what can I really confirm since any feeling I may have had could very well have been by design. Every gesture and movement was chosen, I’m sure, with some playing out like choreography and other moments unfolding as if MacIvor just found the right position at that time. And still, for some reason, there was something to Brooks’ comment, which I chalk up to the newness of it all. At the same time understandable, given the circumstances of the piece being in development, and that development also being part of the festival’s aim. Also, I’ll wager the text itself gets edited in terms of additions/deletions, some of which I might not agree with, but I felt they were still searching for the final form of the piece, so the text certainly seems fair game for tweaking as well, which I’m sure would simply yield results worth exploring.

Being able to finally see MacIvor perform is something for which I am thankful. The last few minutes of the piece were (surprise, surprise) heart wrenching to hear and watch. The final moment – the final breath – of the play was quintessential MacIvor, and just about knocked the wind out of me.

POP-UP LOVE PARTY created by Zuppa Theatre Company
After the MacIvor show we cabbed it to the Lion and Bright Café for some Zuppa! My wife and I had seen one of their shows before when they came to Fredericton and played The Zuppa Circus Open Theatre Kitchen at the BlackBox – that show sits near the top of my theatrical encounters. It was beautiful, and I think often of the line when the son was standing on stilts between the two chefs, the two people who’d created him, and the son looking down and saying, “Once you were giants to me” – Alicia and I wept over that line. The image. It was beautiful. A powerful moment. We hugged our daughter tightly upon returning home.

And so, on this night we find ourselves in a communal bar atmosphere, full of many festival goers and participants it seems, and we’re all anxiously awaiting the (late) start of the show. It was worth the wait. While not a “play” in any traditional sense, Pop-Up Love Party was a theatrical performance which immersed the spectator in the proceedings to joyous success. The Company takes Plato’s Symposium dialogue about the nature of love and makes it their own with the three performers, Susan Leblanc, Stewart Legere, and Ben Stone* all taking turns at tackling their own personalized accounts of the various arguments outlined in the Symposium by those attending the feast. The party. So here were all were, attending the party, drinking and eating (food was part of the ticket option), and having a genuinely engaged encounter with the nature of love. My thoughts were provoked. I laughed, I was brought to emotional introspection, and I got a bit tipsy.

It’s been a while since I’ve taken a look at the Symposium, but it seemed the show was really on the mark for capturing the dialogue’s aims – generating thought and discussion – and doing so through a more updated lens. The performers seemingly expose much of themselves through the performance – at least, we are led to believe this, and so we are pulled in that much more (see notes about “truth” in the MacIvor section above). However, this is not like a “reality” TV show or something, as these people are indeed performers and they are crafting a show, and in that, a story. It’s craft. Nonetheless, the stories used throughout the evening are referenced as “true” and at the end of the evening we, the audience, were offered a chance to share some thoughts about attempts at love – pretty sure all those who shared did indeed share true stories. And thus the Zuppa crew brought this group of strangers together to experience love, together. It was really quite a wonderful time spent amoung all those people – and I am not a people person. Nonetheless, just like the last time I caught one of their shows, one is left with a feeling of, well, of Zuppa. The group creates their own unique theatrical magic, and that is something special.

Just like the MacIvor piece, Zuppa’s work is in-development, with a date of Spring 2015 for producing a more completed version of the piece. There were certainly a few rough moments, and missed timings, but it also all worked and blended with the overall vibe of the evening. We sat with a fella name Clement – hey, Clement! – who was kind enough to let us join him at his table. We were all still stuffed from supper, and filling up on beer as well, so Clement ate our show meal – he said it was delicious! (I had a small taste, and I agree, only wish I had room for more.)

It was truly an evening of Good Love — for those at the Zuppa show, I’m sure you agree.

The shows were part of the joint Magnetic North Theatre Festival and Stages Theatre Festival – the Magnetic North and Stages Theatre Festival – that’s a mouthful, eh? Time for a joint name as well, perhaps? Regardless of the name, and we unfortunately had only the single day in town, the festival(s?) had lots to offer in a wide range of shows, focusing on new work. We’d only heard of the festival about a week or so before we went, and I had some trouble finding information, but I am glad we dug for the info and we’ll certainly be eyeing the festival’s line-up for next year.

* Ben and I were classmates in the 1st year of the Dalhousie University Acting program back in the early ’90s (I did not finish the program, while Ben did, I believe). I was always impressed by his commitment and energy in class, a positive sense of abandon, and it has been a big part of what I have loved about the various performances in which I’ve seen him. Wonderful to see those traits have flourished, Ben!