This show was staged as part of an evening of two one-act; it was preceded by The Dumb Waiter.

Photos by Michael Holmes-Lauder
(CLICK ON PHOTOS TO ENLARGE)

Victor:”Mister ‘Call-Me-Joe’ (and I won’t: call him Joe) says: ‘Hey Victor man, what wuz that you were doing?’ 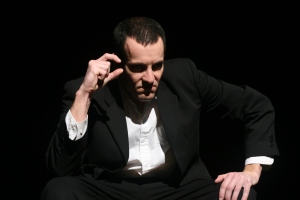 I say, being angry and alone and rolling a tiny invisible ball between my fingers, waddaya think ya jerk! 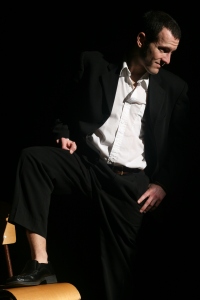 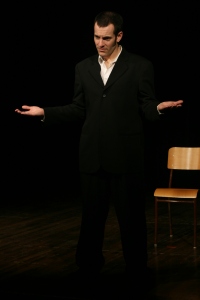 Victor: A man goes to a fortune teller. The fortune teller tells the man: ‘You mus buy a hoose an move into dee hoose unt say der for vun yeer an den dis yeer vill bring for you great sadness unt great joy!’

Well the man was very excited when he heard this because up to that point his life had been plain and unremarkable.

Hole in the wall

Victor: … and you stick your head in the hole and this is what you see: you see him and you think: What, he doesn’t even look sad! He looks bored, this is a gyp, I want my money back. (Two bucks!) I want my money back. But then before you can look away his face goes all foggy and it’s not him any more, it changes into an actual real flesh of you, but you when you were saddest saddest saddest ever in your whole life and …

[VICTOR plays ‘Amazing Grace’ by putting his head back, pluggin his nose and banging on his throat with the side of his hand creating the sound of bagpipes. After a few lines he stops and weeps. He continues. Midway he stops]

Victor: Ah you know how it ends.

[VICTOR snaps his fingers. House lights come up. He smilingly starts down off the stage]

Victor: Oh oh. Oh oh. Oh no. Here he comes! He’s ruining everything! I thought this was a PLAY! Stop! Stop! Now you wish you stayed home to watch teevee eh, teevee doesn’t get up and walk around behind you, don’t have to turn your head to watch teevee, never get a sore neck from teevee. 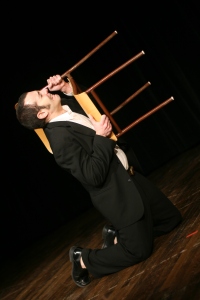 [VICTOR returns to the stage]

Victor: ‘Oh thank God he’s back up there!’
Okay here’s something. 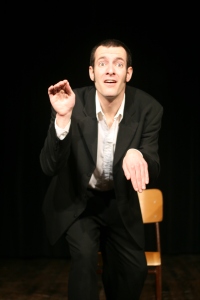 Victor: … this Lionel Ritchie music is playing and in the corner is my sister slowdancing with Hugo the dog! NO THANK YOU! I’m on my way out I almost get killed trying to break up these two Irish setters fighting over the last of the paté and I’m trying to explain to them that hey guys the fridge is filled with paté but that doesn’t matter they can’t open the fridge they got no THUMBS! So I leave this nightmare… 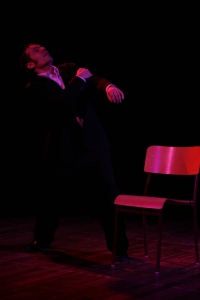 Mother on the ceiling


I come to, the room is filled with smoke and the smell of sulphur. Smoke clears a bit I look up on the ceiling…MA! There’s my mother on the ceiling. Her head is turned right around on her body, her eyes are big as turnips, her tongue is hanging out of her mouth about three feet all pointy on the end lashing around the room slitting the curtains…MA! catches me here on the arm, sixteen stiches… 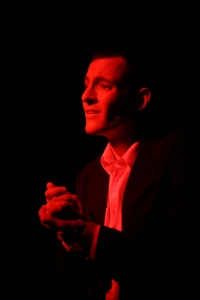 Victor: I get up go over to Millard. Standing there a minute before he notices me.

[VICTOR snaps his fingers. Light becomes a single red spot on him.]

“hi Sir how ya doing good to see ya listen i saw your car in the parking lot you got a wax job eh? looks great i got a wax job on mine last spring fifty bucks but it’s worth it…ah listen i don’t wanna take up too much of your time…”

[VICTOR snaps his fingers, stage lights out. In the black:]

Victor: So it’s all dark. I get out of the car. Millard comes up to me:
‘Wasn’t your wife expecting us ha ha.’
I go in the house, Millard right behind me, walk in the kitchen, turn on the light.

big black boots up to here…no, higher, here, rubber panties, no bra no shirt no nothing, a leather mast that covers her whole head with a zipper for the mouth and in her hand she’s got this peice of hose and she sort of flicks it at me like: Get Lost! Sitting in the easy chair by the teevee all tied up and wearing a diaper is…ANDREW! 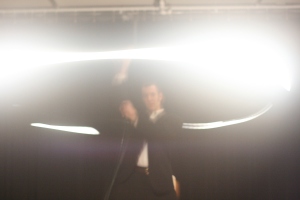 And I think about it!

And I think about it and I think: … 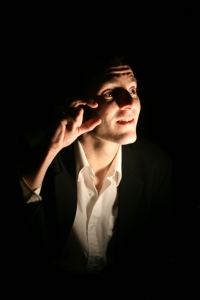 And how oh so very happy we will be, be, be

[VICTOR picks up the clamp lamp, snaps his fingers, stage lights out, clamp lamp on]

Then that woman at the front, in the blue sweater, the one from the pee break who bought the egg salad sandwich, she starts singing this song and we don’t know it but we all start singing it too… well if we sing it I guess we know it …