OLEANNA – From one ‘John’ to another 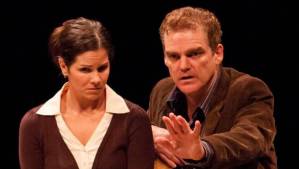 [NOTE: I am honestly not a reviewer by any stretch of the imagination – THIS IS NOT A REVIEW – all this is said in the interest of generating theatrical discussions]

This afternoon my wife and I made our way to the BlackBox on the STU campus to take in Theatre New Brunswick’s production of Oleanna – we, Nasty Shadows, just staged this show back in May (I played ‘John’) so I was very intrigued to see what TNB’s version would offer, and felt myself in a very good spot to really engage since I know the show so intimately at this time. By the end of the first act what struck me most is that I think we made a potentially fatal flaw in our approach in so far as I feel my ‘John’ and Becky’s ‘Carol’ may have made too much effort in trying to communicate during Act I – this choice pulled our entire production in a different direction than the choice made by TNB’s performance and the direction it then followed. This is not to say we failed, but simply that I think this is where a shift in approach occurred and I’m going to blame it mostly on me and my desire never not to be a nice guy – even as the professor I felt a nugget in the text of a nice guy ‘John’ and held onto that a bit. As such, there were key moments in Act I where my ‘John’ was genuinely interested in ‘Carol’ and her troubles. In TNB’s staging it was brutally apparent Shawn Wright’s ‘John’ had no real concern, nor time to have concern for the woes of Natalie Roy’s ‘Carol’. Wright sped through sections of text in a way that made the memory of my own delivery seem sluggish and overwrought with “drama”. (Apologies, but I can only compare what I saw today with what I remember of our production – it gives me grounding for the discussion.) Not that I was “sluggish” because I was certainly aware of what Mamet wanted and Nick’s direction kept that in check. I was just very impressed by the first act’s ability to portray these two people having two conversations with neither, but especially the professor, engaging in the other’s side of the conversation. ‘John’ carries that act in some sense, so it’s not surprising that most of this seemed driven by Wright’s stripped and mildly robotic portrayal. He was cold in a way I can’t quite pin down because there was this element of charm – almost salesman-like – made me want to keep watching him. Meanwhile, Roy’s ‘Carol’ was rather aloof in her own way. At the end of the act I had no real sense of what ‘Carol’ was really like. Roy seemed to be following the Mametian method as well of just speaking the text and not embellishing needlessly to try and “help” it. Both actors exercised great craft in this regard, I thought.

By contrast, I think my ‘John’ fell tragically in a different way than Wright’s. His ‘John’ had more of a wake-up call with the realization provoked by his final drastic action rather than a build to that. It was very interesting to me to watch Wright carry the same basic ‘John’ through the entire show, until erupting a few moments in the third act just briefly, and then his explosion in that final scene. We had used the elapsed time in the story between acts to send both ‘John’ and ‘Carol’ further down their respective journeys, I think. The version I witnessed today seemed like the story transpired over just a few days – our version had the sense of a couple weeks passing so the tragedy unfolded more gradually. Interesting choices that change details of the story telling, these were the things that intrigued me this afternoon. And then, I also found it funny to see Wright gesture or stand in the same way I’d stood for a particular line or passage – like the moment begged you go be on the corner of the desk talking over it so you could wrap your knuckle on the book, etc. But his delivery of certain lines and passages rang so oddly in my head since they were so unlike my own, and yet I was thoroughly fascinated by these differences. Of course, there was a greater age difference between TNB’s characters and that altered things considerably as well.

In the end, as far as the controversy goes and as I think is just the case with the script, I hate ‘em both for their self-centered agendas. Well done.

I would be interested to hear any comments from anyone who happened to see both our production this past spring and TNB’s, just to hear what you thought.

And my apologies to the actors as I was sitting in the front row and I’m pretty sure I was lip-syncing at times – my wife said I was moving/shifting at times … must have been following my blocking! HA!